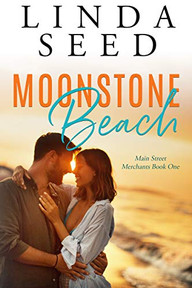 Linda Seed is a Cambria based novelist who writes the best tales set in the beautiful Village of Cambria. All books are signed by author.

She’s a divorcee who’s struggling to recover. He’s notorious for his reckless ways with women. What could possibly go wrong?

Kate Bennet owns a bookstore in the breathtaking beach town of Cambria, California. Two years out from a divorce that left her emotionally fragile, she’s starting to think that maybe she’s ready for love again—or at least for a fling with a hot man. Jackson Graham is a local chef who’s controlling when it comes to food, careless when it comes to love, and temperamental when it comes to just about everything.

When Kate’s friends set things up between Kate and Jackson, she expects some casual pleasure followed by a hasty goodbye, but Jackson’s long-term crush on Kate means that he’s in this one to win. The problem is, neither he nor Kate knows whether he can change the self-defeating habits that usually send women scurrying for the door.

A ruined reputation. A second chance. A conflict between love and ambition.

Genevieve Porter was forced to flee the art world of Manhattan after she blew the whistle on the shady practices of a powerful dealer. Now she owns a small gallery in the scenic beach town of Cambria, California. For Gen, this is a place to regroup; she’s poised to restore her name in the art world and return to New York in triumph.

When she meets Ryan Delaney, a cattle rancher who’s more than he appears to be, she’s ready for a sexy roll in the hay—literally. But as her feelings for him become more than casual, she realizes that his roots on the Central Coast go back generations, and it’s going to be a challenge to lure him away from his family’s land.

If they’re going to make a life together, one of them will have to give up old ideas, old goals—old feelings about what success means, and what makes a place a true home.

She’s an up-and-coming interior designer with a multimillionaire client. If only she could make him see that it’s his life—not his house—that needs a remodel …

Martina Russo’s career has been coming along nicely, including a write-up in a regional design magazine. When tech mogul Christopher Mills asks her to freshen up his historic Victorian mansion, it’s the kind of job that has the potential to launch her business to the next level, making her a premier designer to the rich and famous.

The problem is, she’s got a nagging feeling that a new kitchen and a bigger master bath are not the kinds of changes he really needs. He’s looking for a bigger renovation—one that will bring love and meaning to a life that’s in desperate need of repair.

Benny’s involved with the wrong man. Ike is sure he can change that, if only he can get out of the friend zone …

Benedetta Russo’s had a run of bad luck in love, in her career, and now in her family life. It’s hard enough that she’s mired in a relationship with a man who doesn’t deserve her, but a recent discovery has her questioning all she thought she knew about her parents’ marriage.

When an incident with an endangered fish brings Benny into YouTube star Ike Fitzgerald’s life, he quickly begins to think of her as a friend—and then more than a friend. He’s sure that together, they’ll be able to tackle the challenges facing both of them—if only he can convince her that love doesn’t necessarily equal pain, disappointment, and disaster.